Another of the top 5 questions has to be “What kind of personality will my puppy have”? That question is often followed by, “I think I will wait until the litter is 8 weeks old so I can see the personality and select my puppy then”. Next statement is, “I like the puppy to pick me so I will want to play with them and see which puppy keeps coming back to me”.

Do you think of yourself asking these questions? Of course you do. This is common when you are making the big decision of selecting a dog. Here are the answers to the questions, and I don’t think you will like what I am going to tell you!

Even if you are not a parent, you certainly have been around a newborn baby at some point in your life. So I ask you this, “What personality did that newborn baby have”? In all honesty you have to say “NONE”—but you know that as the baby grows its’ developing personality is influenced by environment. Baby finally develops into a child that enters into and is further influenced by interacting with others at school. It is the same with the puppy. Its personality depends when you arrive on the scene; newborns will just lay there like “blobs”, at 3 weeks they are attempting to wobble to a stand—-same as a baby at 9-12 months of age—
4 weeks they are engaging each other during the short waking moments, by 5 weeks they are fully mobile and very interested in what is going on around them and at 6-8 weeks they appear very outgoing and genuinely want to make friends with humans! They are playing with each other; sometimes it gets so loud I can’t hear the TV! THIS IS PERSONALITY at this age. With a litter this age, I am looking for this “inter-reaction”—it is the building block to the next stage of maturity. Often there is a quiet one, standing watching a game of “tug-o-war”. This does not mean that pup has no personality.
I have all too often seen this behavior pattern change in the next week to strongly confident or evolve into a fabulous easy going playmate for young kids. It always strikes me as funny when a buyer stands looking for the most outgoing pup in a litter—–maybe they read it somewhere or in “human” terms they see this pup as growing to be a real “go getter” as an adult. STOP and think about that——you are looking at a baby in the “appropriate age litter activity” suddenly you see the pup at age 2! You have NOT added in your lifestyle, or your children’s personalities. All that will impact the pup AND the pup will adapt to perhaps another dog or a cat in the house, or an elderly family member that lives with you.
Mom reports: “He finally took a little rubber chew toy tonight. Syd gave it to him. She was so excited when I told her “you gave him his first bone!” Then when Tucker took a break, I looked over and saw Syd with it in her mouth! “Syd! THAT is only for Tucker!” She said, “I just start it for him!!!”
LITERALLY OUT OF THE MOUTHS OF BABES!
Next, we need to address the “coming to play with the puppies thinking”. Many times I have had a client put off when I tell them that I can’t allow their children play on the floor with the puppies and choose the one they want. That only happens in a Disney movie! IN FACT, NOBODY handles the puppies. You arrive here with germs all over you. If everyone who came to look at the puppies was allowed to handle them, not only would it be too much stress, it would be exposing the pups to the germs from all the places the visitors had been. Think of it this way; when you brought your newborn home from the hospital, did you let all of your friends and neighbors hold the baby? Of course you didn’t. And that will be the rule for your new puppy. ONLY family members that share the house with the puppy can handle the puppy UNTIL all the shots are finished at 16 weeks. 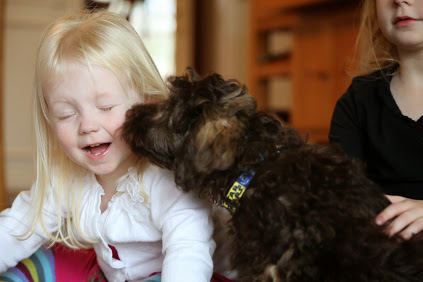 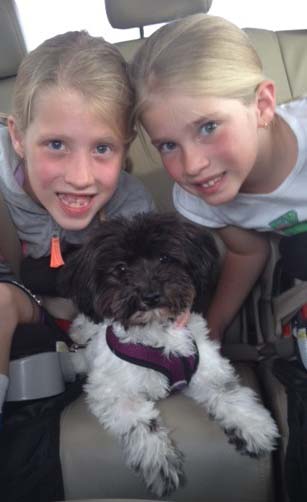 YES, Schnoodles go to soccer practice!
This lady wanted a “small” dog. I picked out this one and told her she may mature to a maximum of 8#. It was a good call, you can see by the letter below, she was a bit smaller and so, just perfect for 2 little girls! Just wanted to give you a quick update on our little Lola….. We just love her! She seemed to have stopped growing for the most part and is a wonderful 6.5 lbs. She walks anywhere from 3 to 6 miles about 5 days a week with me and then could go on to run for a few more hours in the back yard with the kiddos. Her favorite thing is playing with the girls usually fetching her tennis balls or playing tug-o-war and loves to end her day with lots of cuddles on someone’s lap before going to bed in her pen. She has really completed our family and we look forward to many years of happiness and joy with her. Thanks again for giving her such a great start! Here is a cute pic we took this week of her and the kids going to soccer practice. Sara B, Colorado
FOLLOWING 1 pup from age birth to 9 weeks 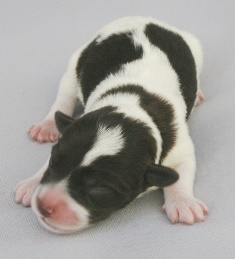 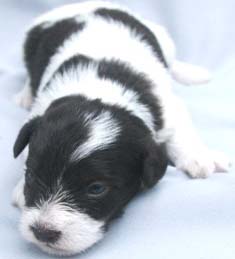 The day one of them discovers he can bark is always funny and especially startling to the pup that did it! He will look around as much as to say, “where did that come from”! ALL these things are “normal” puppy behavior but NOT ONE OF THEM suggest personality. So you see, you are missing nothing!

You really won’t see the true definition of personality UNTIL you have had the puppy live with you for a month or so. They take on the “personality” of the people they live with and this will be apparent to you. This “family” personality comes with maturity, confidence and living with the new owner. 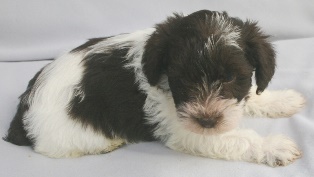 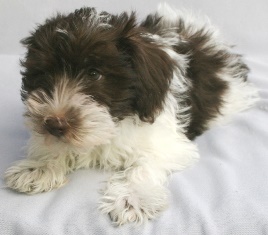 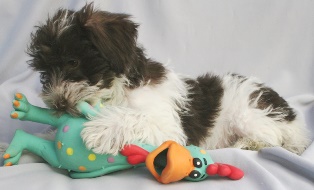 Meet Prozac (owner is a Dr., I love the name!)This pup was selected at birth via photos. Photos make it obvious that there is NO PERSONALITY SHOWING THE FIRST 6 WEEKS OF LIFE. If you are hoping to come when pup is 8 weeks old, pups will still be here BUT will be waiting to go to their new homes. Was this what you hoped to come and see before making a decision? If so, THEY ALL REACH THIS FUN STAGE. You may be lucky to find some older pups available, selection will be small. You missed picking out of a litter group, watching it grow, through photos just like the Prozac did.

The biggest changes in puppies are from birth to 4 weeks. After that, development proceeds slowly every few weeks. These changes are “size” and more “hair”.I choose 4 weeks & 6 weeks as the PHOTO UPDATE times so you can follow along on the growth of your puppy. Your puppy is finally starting to look like a dog! Ashlee will take a photo/short video on her phone camera and text or e-mail the update to you.
SCHNOODLE DISPOSITION / TEMPERAMENT
Of course you want a puppy that will mature to be a family member—many breeds are known to be strongly independent, hyper, and reserved. This doesn’t make them good pets, BUT it is a good idea to KNOW your breed so you can KNOW that your expectations will be met. My mum loved West Highland Terriers. They are a WHITE Scottie dog. She owned hers for 14 years. But the “whole people/ loving/companion thing generally is NOT part of the Westie disposition.” Mum’s dog was more like a cat. She would come, want a scratch or even sit with you for a few minutes BUT it was never long and the dog then went down to sit on her bed. Over the years, talking with people who own these dogs, I was told that this is part of the personality of the breed. After the dog died I sent mum (age 91) one of my retired Poodles. Mum and Poodle are best friends and inseparable. The dog helps with the loneliness. My mum sits every day with the dog curled up beside her. Mum has often said to me that she never realized a dog “could love you back as much as you loved them”. Of course, that is the nature of the poodle.
WE CROSS the overly loving endurance capable Poodle with the loyal, quiet laid back Schnauzer and we get this incredible puppy! I am TALKING 18 YEARS of the same disposition, pup after pup after pup! Trust me, when I tell you, this is the last thing you need to concern yourself with! This puppy will mold into the environment of the home and the personality of the people living in it. 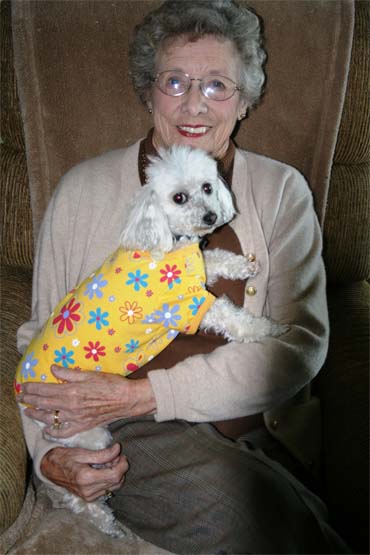 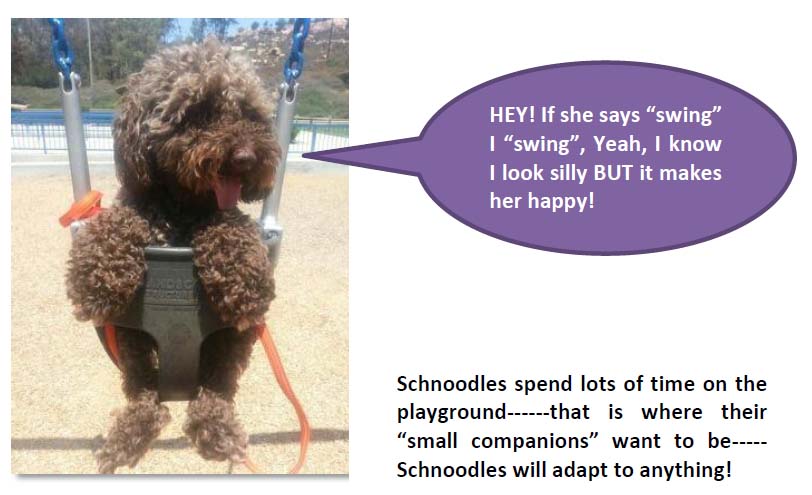 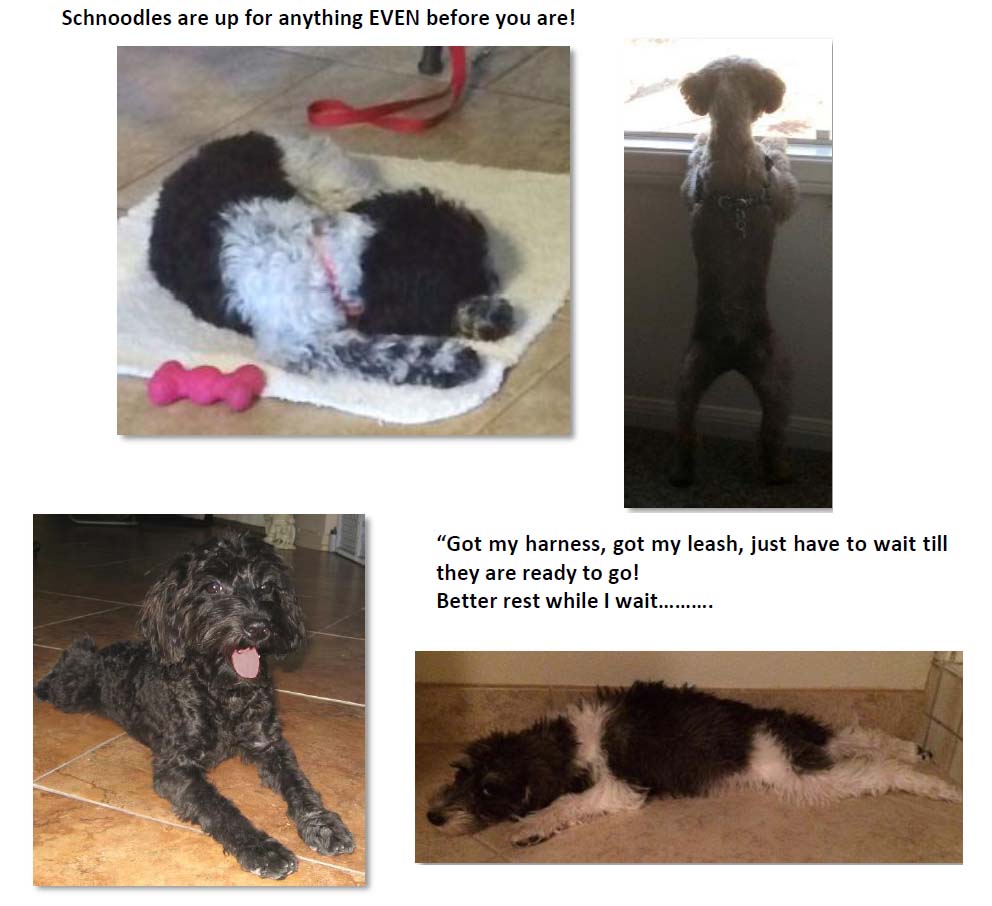 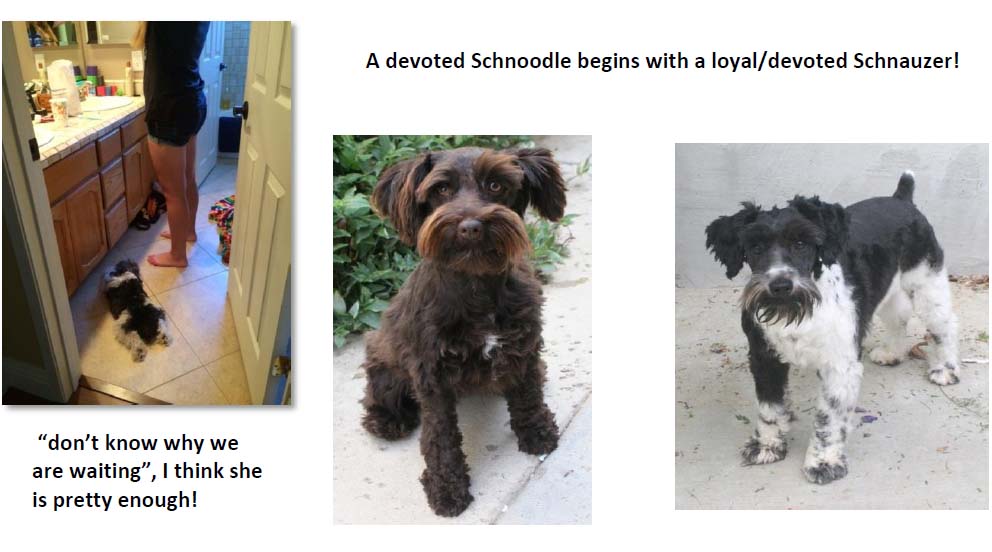 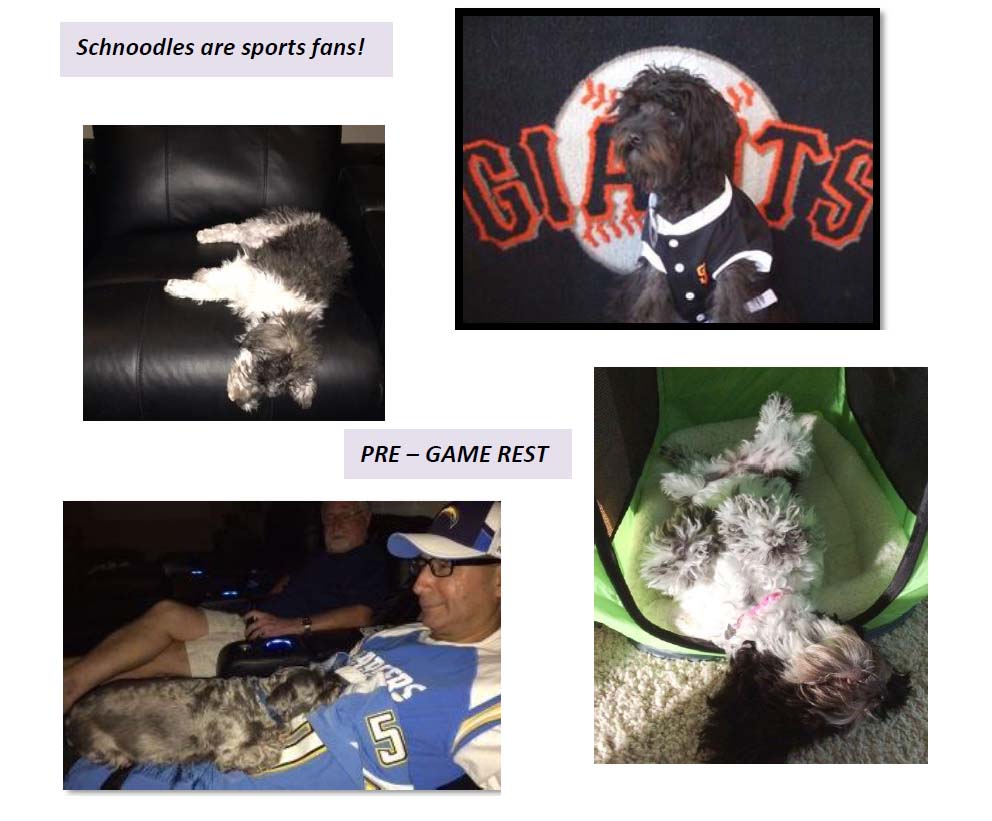 Greetings Norma from the San Francisco Bay Area. Let me start off by saying we love our Schnoodle. I thought it was past time we wrote to thank you for our wonderful family friend and to share some family photos. It’s been three years and we still believe Koda was/is a wonderful addition to our family. What a great first dog he has proven to be for a family with little to no dog experience. Koda interacts with all the family differently. I had no ideas they had such distinct personalities. Koda and I walk every week day morning for 2 miles. He sleeps with Eboni whenever she’s here (she’s in college now and spends half the week days on campus). She claims he’s a bed hog but that’s between them. And then Isaiah and Kenny are the ones he enjoys rough housing with. He loves it when Kenny comes home and truly believes he should be the first one to be greeted and acknowledged. Did I mention that Koda thinks he’s a Rottweiler or a Doberman. No one can park in front of the house or come on the porch without Koda letting us know they are present. It’s quite funny to us, people think we have a guard dog until we open the door.
As you can see we love Koda fluffy, but on occasion we have to take him to the groomers for a cut, I’ve included a photo right after a visit to the groomers. Let see, what else. Oh yeah. He’s about 14 lbs and goes to doggy daycare twice during the week. Koda was easy to train and Isaiah is constantly reassuring him that he’s the “best” dog ever. We love Koda. Well, that’s it for now. Thought you’d like to hear about Koda. I believe he’s very happy, we certainly are! The Greens, Kenneth, Angie, Eboni, Isaiah and Koda 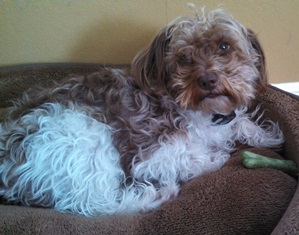